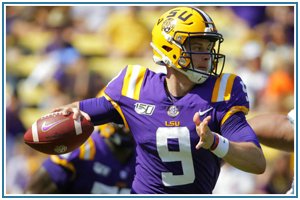 The Andy Dalton era has proven to be the definition of quarterback purgatory for the Bengals. Dalton has been just good enough to keep Cincinnati around the .500 mark, give or take a win or two, but they’ve never been a legitimate contender under his stewardship. The Bengals finally bottomed out this season and after benching Dalton it appears they are ready to move on from their long-time signal caller. Burrow entered the year with late round grades from NFL scouts, but a phenomenal senior campaign has put him firmly in contention to be the #1 overall pick in the 2020 NFL Draft. Burrow possesses acceptable levels of all the prerequisite physical tools for the next level such as size, arm strength and athleticism. However, it’s his intangibles that put Burrow over the top as he’s proven to be a confident, competitive leader of men and a true field general. 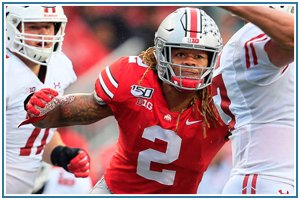 A pass rusher isn’t necessarily the Redskins most glaring need but they will jump at the opportunity to select Young. The positional value of quarterbacks could push Young down the board a pick, but he will be almost universally regarded as the top prospect available. A generational talent at a premium position, Young is a physical marvel with a rare blend of size, speed and athleticism. Young isn’t just a workout warrior though and consistently translates those eye-popping raw tools into dominant, game-changing on-field production. Not only does Young belong in the discussion with other recent elite pass rushing prospects such as Jadeveon Clowney, Joey Bosa, Myles Garrett, Bradley Chubb and Nick Bosa, but an argument can be made that he’s the best of the bunch. For teams not in the market for a signal caller Young is about as close to a no-brainer as it gets. 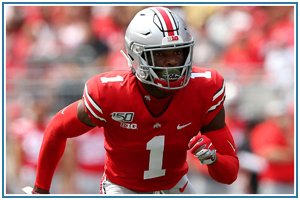 Considering they have one of the leagues worst pass defenses the Lions would be fortunate to find Okudah still on the board at this point. A unanimous five-star recruit coming out of high school, Okudah only had one career start entering his junior season due to the embarrassment of riches the Buckeyes have had at the cornerback position in recent years. Despite that modest experience Okudah was projected to be a Top 10 pick based mostly on potential. Not only did Okudah live up to those lofty expectations, he surpassed them. A big, fast and athletic cover guy, the physical tools were never in doubt with Okudah. Scouts wanted to see him make more plays in the secondary though and Okudah answered those questions in emphatic fashion. Okudah is arguably the first true shutdown corner to come along since Jalen Ramsey and is a better pro prospect than former teammates Marshon Lattimore (#11 overall in 2017) or Denzel Ward (#4 overall in 2018). 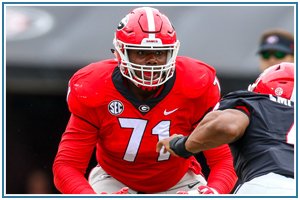 The Giants are building around quarterback Daniel Jones and running back Saquan Barkley, but in order for those two to succeed they need to shore up the offensive line. There figures to be a three-way battle to be the first offensive tackle off the board between Thomas, Tristan Wirfs of Iowa and Jedrick Wills, Jr. of Alabama. Each has their proponents in the scouting community and all three should come off the board in the initial dozen picks. Thomas was a three-year starter who routinely faced some of the countries premier pass rushers and often made it look easy. Thomas is a prototypical left tackle with an impressive combination of size, athleticism and nimble feet who profiles as an immediate high-level starter at one of the games most important positions. This could is also a spot to keep an eye on for a trade as someone might want to jump up for a quarterback and the Giants could still get one of those three blockers a little later. 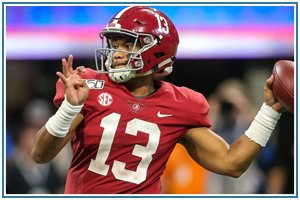 Even though they didn’t secure the #1 overall pick the “Tank for Tua” strategy is still effective as the Dolphins get their guy. Miami’s desire to land a franchise signal caller is the worst-kept secret in the league so this may merely be a question of Tagovailoa or Oregon’s Justin Herbert. Tagovailoa’s stock is clouded by a season-ending hip injury, which is just the latest in a string of lower body ailments. Indications are that Tagovailoa is expected to make a full recovery and if that’s the case he should still be a Top 5 pick. If the medicals don’t check out or the Dolphins are just generally concerned about his durability they could audible to Herbert, who the organization is also said to be high on. When healthy Tagovailoa is a dynamic playmaker in the mold of a Steve Young or Russell Wilson, capable of making plays with his arm and legs. Tagovailoa also possesses the top-notch intangibles needed to thrive as a quarterback in the NFL. 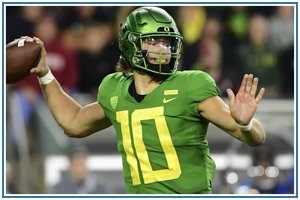 The past few years there has been speculation that the Chargers might use an early pick to bring in an heir apparent to Philip Rivers, but thus far they haven’t deemed it a priority. With Rivers now 38-years-old, showing clear signs of regression and a free agent it needs to happen sooner rather than later. Hebert would’ve been one of the first signal callers off the board a year ago, most likely in the top half of round one, but opted to return for his senior season with the Ducks. Physically Herbert is the total package with an excellent mix of size, arm strength and athleticism. However, there are concerns about whether he has that all-important X-Factor due to his inconsistency and struggles to come through in the clutch. On paper Herbert is a Top 5 overall pick and could still easily go that early, but there is the possibility of a slide on Draft Day due to those reservations about his intangibles. 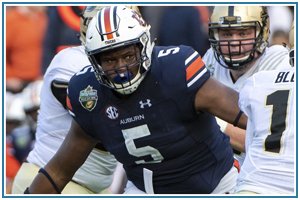 There will likely be some major changes coming along the defensive line in Carolina this offseason, with Gerald McCoy and Vernon Butler both set to become free agents. Depending on how that plays out an infusion of youth and talent may be required up front. Brown likely would’ve been a Top 20 pick a year ago but opted to return for his senior season, which proved to be a wise decision as he further enhanced his stock. The freakishly big and athletic Brown is capable of playing multiple positions and in either an even or odd front. Whether it’s stuffing the run or penetrating to make plays in the backfield, Brown is a difference-making presence up front. Brown also earns rave reviews for his character and intangibles and is exactly the type of player new head coach Matt Rhule will want to build his team around. 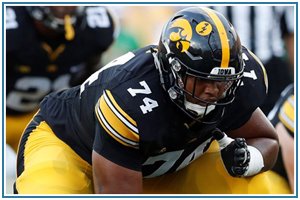 Everything in Arizona revolves around Kyler Murray so supporting their young franchise quarterback needs to be the priority. That should start with the protection up front, especially since Murray’s slight frame isn’t built to withstand a lot of punishment. Wirfs became the first true freshman to start at offensive tackle at Iowa under Kirk Ferentz, which is quite an accomplishment considering how many pro blockers the program has produced during his tenure. That list includes first rounders Bryan Bulaga, Riley Reiff and Brandon Scherff, but Wirfs might be the most talented of all. A rare physical specimen, Wirfs took the #1 spot on Bruce Feldman’s annual Freaks List in 2019 due to an eye-popping combination of size, strength and athleticism. Those tools translate to the field as well, with Wirfs excelling in pass protection and as a run blocker on both the right and left side for the Hawkeyes. 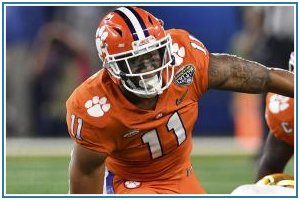 This is a bit of a tough spot for the Jaguars because value-wise it would be a reach to address either of their two most glaring needs at cornerback or tight end. Instead they opt for a fascinating jack-of-all-trades capable of making an impact on all three levels of their defense. The uber-athletic Simmons is an extremely unique prospect who champions would call a linebacker / defensive back hybrid while detractors might use the phrase positional ‘tweener. Regardless of the label Simmons is a rangy, versatile chess piece ideally suited for a modern defense. Questions about his position at the next level make him somewhat of a difficult evaluation for scouts, but the bottom line is Simmons is a playmaker whether it’s as a linebacker, safety, cornerback or edge pass rusher. 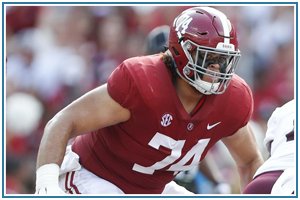 The decision to go with journeyman Greg Robinson as Baker Mayfield’s blindside protector raised a lot of eyebrows and it went about as poorly as could’ve been expected. The Browns won’t make the same mistake again though and a left tackle will undoubtedly sit atop their offseason shopping list. An outstanding junior season in Tuscaloosa sent Wills’ stock skyrocketing to the point where he is now contending to be the first blocker selected, perhaps as early as the Top 5 overall. Wills is a massive physical specimen who is surprisingly athletic and moves well, with the length to maintain separation in pass protection and the power to generate movement as a run blocker. Wills is a tough, battle-tested, two-year starter for the Crimson Tide at right tackle but also displays the tools necessary to kick over to the left side at the next level. 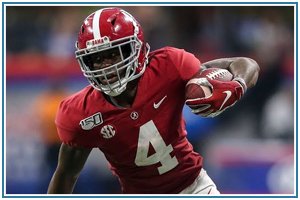 The Jets had one of the most feeble passing attacks in the league, which can largely be attributed to a severe shortage of playmakers. It’s time to give young quarterback Sam Darnold some help and there will be plenty of options since wide receiver figures to be the strongest position in this class. In fact, many feel this crop of pass catchers could go down as one of the best of all time. Despite that tremendous depth there isn’t a Calvin Johnson, A.J. Green or Julio Jones level elite talent at the very top, but Jeudy is the favorite to be the first off the board. Jeudy is a smooth athlete who’s fast and elusive with excellent hands and ball skills, but what stands out most is his stellar route running ability. The guy just knows how to set up defense backs and get open. Jeudy actually compares quite favorably to Amari Cooper due to their similar frames and polished skill sets. 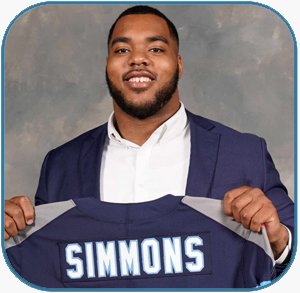