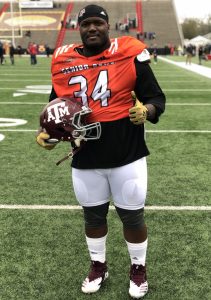 Every once in a while there are prospects with such unique body types that you can’t help but take notice. Texas A&M DT Daylon Mack is definitely one of those guys.

As the kids would say, Mack is “thicc”, checking in at 6-1 and 327 pounds with large 10 1/8 inch hands. Mack is extremely stout and powerful and plays with outstanding leverage. He isn’t going to offer much as a penetrator due to marginal athleticism and less than ideal length but did flash some ability as a bull rusher. Mack got the call up after a strong week at the East / West Shrine Game and has more than proven he belongs.

Mack is probably going to be available on Day 3 because he is so one-dimensional. However, at that point he’s going to be a nice option for teams in search of a run stuffer who can hold his ground at the point of attack. Think along the lines of Derrick Nnadi, who was a third round pick of the Kansas City Chiefs a year ago. 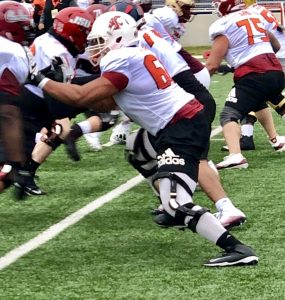 I was already a fan of Washington St. OT Andre Dillard coming into the week, placing him in the first round of my initial mock draft. So far I’ve only grown fonder of the athletic left tackle prospect. And his performance is all the more impressive when you factor in the high-caliber of pass rushers he’s facing on the South squad, including Montez Sweat of Mississippi St., Oshane Ximines of Old Dominion and Jaylon Ferguson of Louisiana Tech.

Dillard looks every bit the part with a prototypical 6-4 7/8 inch, 310 pound frame and 34 inch long arms. Having played in Mike Leach’s pass happy attack in college there’s little doubt about Dillard’s ability to protect the edge. The question mark is run blocking, but Dillard has clearly made strides in terms of his hand use and technique.

Dillard isn’t always mentioned in conversations about the top blockers in this class, but he is arguably battling Ole Miss OT Greg Little to be the first left tackle prospect off the board. Remember, Jonah Williams of Alabama, Jawaan Taylor of Florida and Cody Ford of Oklahoma all profile as either guards or right tackles. Don’t be surprised if Dillard winds up coming off the board earlier than most expect, perhaps in the Top 15-20 overall. 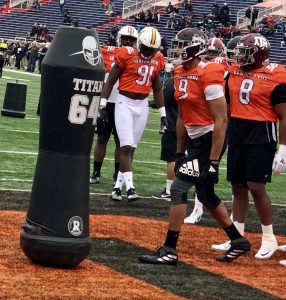 Coming into the week I thought Mississippi St. DE Montez Sweat had a chance to be this year’s version of Marcus Davenport. A year ago Davenport arrived at the Senior Bowl as more of a late first round pick and played his way into the Top 15 overall. It’s only the first day but Sweat is already trending in that direction.

It started at the weigh-in, where Sweat had scouts drooling over his 6-6 / 252 pound frame with 35 5/8 inch vines for arms. It certainly didn’t stop there though. Sweat was also a standout at practice on a squad littered with highly-rated sack artists. A dynamic athlete with terrific speed, Sweat terrorizes blockers off the edge and was one of a select few to get the best of Washington St OT Andre Dillard today. He isn’t a complete liability against the run either, using his length and hands to disengage. I still want to see how well Sweat moves in space this week and whether he’s capable of playing on his feet as an outside linebacker in a 3-4 scheme. However, my inclination is that he appears best suited to play with his hand on the ground.

Right now the consensus seems to be that Nick Bosa of Ohio St., Rashan Gary of Michigan and Clelin Ferrell of Clemson are the top defensive ends in this class. All three could be gone in the Top 10 overall though. If that happens somebody is going to get pushed up and Sweat is making a strong case for himself.

The Countdown with L.J. Collier