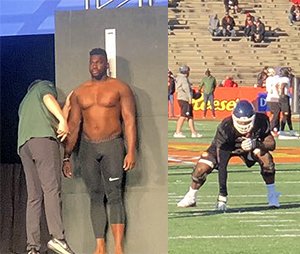 At the introductory press conference Senior Bowl executive director Jim Nagy compared Connecticut OT Matthew Peart to D’Brickashaw Ferguson. That is probably overly optimistic, as Nagy also noted, but it’s easy to see why many are so excited about Peart’s sheer physical tools and upside.

Peart, who is originally from Jamaica, spent most of his youth focused on basketball but eventually turned his attention to the gridiron in high school. Peart was under-recruited due to that late start but has blossomed during his time at UConn, with the best seemingly yet to come.

Physically Peart has it all, including a 6-6 1/2, 310 pound frame with long 35 1/8 inch arms and an 86 1/8 inch wingspan. Those impressive dimensions made Peart one of the stars of the weigh in. Peart then went out onto the practice field and showcased his athleticism, nimble feet and movement skills. Even though Peart is still working on mastering the nuances of the game the early round talent was clearly evident. An ascending prospect, don’t be surprised if the toolsy Peart comes off the board on Day 2 by the time April rolls around. 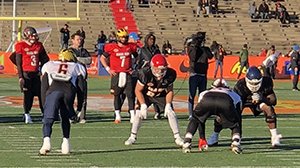 Dayton’s Adam Trautman has been considered one of the top senior tight end prospects in this class for a while. However, many evaluators were holding back from stamping a Day 2 grade on the small school standout due to concerns that he was a big fish in a small pond at the FCS level. Based on the first day of practice in Mobile those reservations should quickly begin to dissipate.

Trautman put the stellar pass catching ability and smooth athleticism that enabled him to dominate against lesser competition on display, but more importantly showcased considerable improvement as a blocker. As a former quarterback Trautman has a keen understanding of offensive football and is capable of lining up all over the field. It’s also not a stretch to say Trautman has been one of the most popular prospects with the NFL personnel in town this week, and all that interest would seem to bode well for his draft stock.

It’s been more than 40 years since a prospect was drafted from the Dayton Flyers program, but Trautman is going to put an end to that streak in a big way. 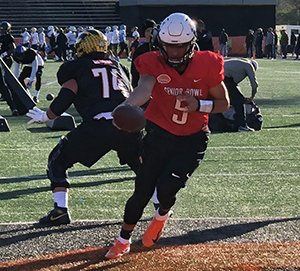 Much like Justin Herbert, his fellow highly-rated counterpart for the South, Utah St. QB Jordan Love was clearly the cream of the passer crop for his squad.

Love demonstrated an impressive all-around skill set, most notably a strong arm to cut through the wind and the ability to make throws that few can. Love is rough around the edges and coming off a disappointing final college campaign, but it’s hard not to be infatuated with the toolsy gunslinger. If Love can rein in his accuracy as the week progresses the hype should continue to build.  Draftniks are well aware that signal callers have a tendency to get pushed up the board on Draft Day due to the positional value and Love is a prime candidate due to his tremendous potential.

At the start of the week I said Love had as much to gain as any prospect in Mobile, with a chance to play his way into the top half of the first round. So far he’s off to an excellent start.