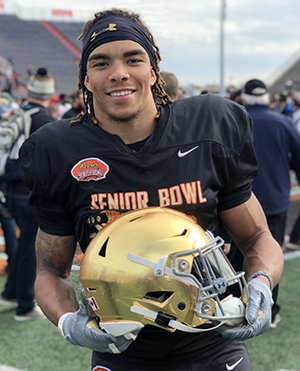 Notre Dame WR Chase Claypool is one of my personal favorite prospects in this class and he is generating some buzz in Mobile.

Any conversation about Claypool has to include his outstanding special teams ability.  Even if Claypool offered nothing on offense he can play in the NFL for long time as an elite gunner.  He just happens to be a pretty good wide receiver as well though.  Claypool is a specimen at 6-4 3/8 and 229 pounds with big hands and long arms that present a huge catch radius who knows how to use that large frame.  There is a misconception that Claypool lacks speed, leading some to suggest he should bulk up and transition to tight end.  In reality Claypool has actually been one of the fastest players on the North squad in both practices according to tracking data provided by Zebra Technologies.  Don’t be surprised if he runs better than most expect in pre-draft workouts.  In addition to those natural physical gifts Claypool has shown some nuance as a route runner and is also a very effective, aggressive blocker.

Last year fellow Golden Domer and former teammate Miles Boykin was a third round pick and in my opinion Claypool is a superior pro prospect.

Southern Illinois S Jeremy Chinn is yet another small school standout who has really risen to the occasion in Mobile.  Not just proving he belongs but excelling against some very talented pass catchers.

One could be forgiven for assuming that a safety who checks in at 6-3 1/8, 219 pounds is more of a downhill, in-the-box type.  That isn’t the case though as Chinn has been performing extremely well in coverage this week.  Chinn has even been getting reps at both outside and slot cornerback, showing the ability to run stride-for-stride with legitimate NFL-caliber wideouts.  In today’s game where offenses attempt to create and expose matchup problems versatile defenders are at a premium.  Chinn is exactly the type of multipurpose performer that teams are searching for on the back end.

In his most recent rankings small school prospect guru Josh Buchanan had Chinn projected as a 5th Round value.  That now feels like a worst-case scenario and Chinn could come off the board a round or even two rounds earlier. 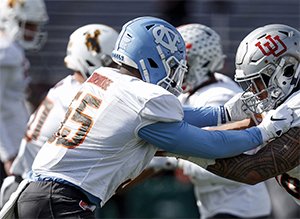 One of the great things about getting to see prospects in person at the Senior Bowl is that sometimes they surprise and defy preconceived notions.  That has absolutely been the case with North Carolina DL Jason Strowbridge.

Coming into the week I thought of Strowbridge as a defensive tackle / defensive end ‘tweener with limited pass rush potential.  Instead he weighed in 18 pounds lighter than he was listed with the Tar Heels, with a far more linear and svelte physique.  Reshaping his body has also made Strowbridge more athletic, quick and explosive with far better movement skills than I recall seeing on tape.  I kind of scoffed when I saw Strowbridge listed as an “EDGE” when the roster was released but as it turns out that wasn’t so much of a leap.

That’s not to say Strowbridge is ever going to be a dynamic, double-digit sack artist.  After all, he only notched 11.5 over four years in college.  Strowbridge definitely has more pass rush upside and positional versatility than I gave him credit for coming into the week though.  Plus he still provides the strength, technique and length that made him a fringe Day 2 / Day 3 prospect beforehand.