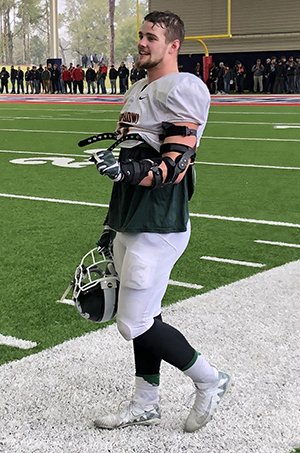 Michigan St. DE Kenny Willekes wasn’t added to this year’s roster until about a week before the event.  Whether that was due to a delay in the invitation being extended or Willekes waiting to accept, the Spartans uber-productive pass rusher has proved that he belongs in Mobile.

Willekes isn’t going to impress anyone with sheer physical tools such as speed or athleticism but the former walk-on compensates with top intangibles.  Particularly intensity, a non-stop motor and a wide array of pass rush moves and counters, which helped him rack up 51.0 tackles for a loss and 26.0 sacks during his college career.  Willekes has just continued to make plays at the Senior Bowl, consistently winning reps and harassing quarterbacks.

Willekes has seen action at both his natural defensive end position as well as outside linebacker this week, although playing on his feet at the next level seems like a stretch.  Because of all the question marks Willekes will likely slide further than his college resume would otherwise suggest, perhaps well into Day 3.  With that said Willekes is the type of guy you want on your team and bet against at your own peril. 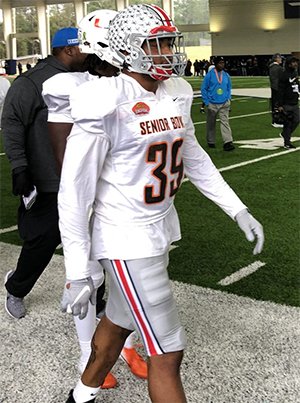 Ohio St. LB Malik Harrison is a potential Top 50 overall pick but isn’t always recognized as one of the best prospects in this year’s game.  Perhaps that’s because he’s an off-the-ball linebacker as opposed to a flashy edge pass rusher.   Despite the limited buzz Harrison has performed quite well, showcasing a nice mix of speed / athleticism and power as well as superb instincts and awareness.

Capable of playing outside or inside, Harrison profiles as more of an in-the-box type but can make some plays in coverage too.  As evidenced by a highlight reel interception in today’s practice session.  There are clearly linebackers in town with better range and movement skills, but Harrison has done what he does very well throughout the week.

Harrison has been talked about as a first round possibility at times throughout the process, but because his brand of ‘backer isn’t necessarily en vogue in the NFL these days will likely be available on Day 2.  Harrison won’t be for everyone but will appeal to teams looking for a stout, tough, physical, old-school ‘backer. 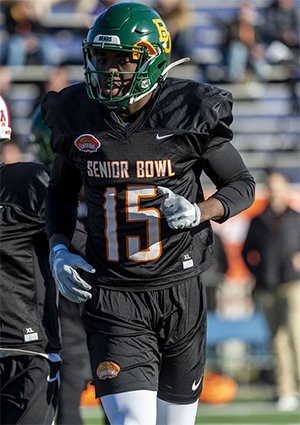 This is one of the deepest groups of pass catchers the Senior Bowl has seen in quite some time but there isn’t a clear-cut standout like Deebo Samuel last year.  Any list of the top performers at the position will likely include Baylor WR Denzel Mims though.  In fact, an argument can be made that Mims has been one of the most impressive prospects in Mobile regardless of position.

Consistency was an issue for Mims in college but hasn’t been a problem this week, with Mims routinely making plays.  Mims is a tall, lanky wideout with an outstanding catch radius and the ability to go up and get the ball.  Because of his length Mims doesn’t always appear to be moving extraordinarily fast but rest assured the former track star can take the top off a defense.  As more than one defensive back has learned the hard way this week.

Mims gets lost in the shuffle to a degree amidst all the talented wideouts in this class, but that should start to chance with this Senior Bowl performance.  Coming in Mims was viewed as a fringe Day 2 / Day 3 value on most draft boards but his stock is heading North and that momentum now makes a spot in the Top 100 overall more likely than not.