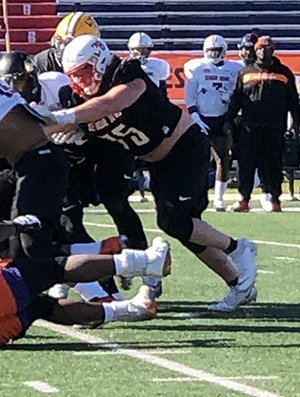 It’s rare for a player from the Division 3 ranks to be selected in the NFL Draft, but St. John’s (MN) OL Ben Bartch will be one of the exceptions. Much like Ali Marpet, the pride of Hobart who parlayed a strong Senior Bowl week into a spot in the second round. Bartch is a former tight end who only transitioned to the offensive line a couple years ago. Bartch certainly passed the eyeball test at the weigh-in, checking in at 6-5 3/4 and 308 pounds with 33 inch arms and the frame to handle even more bulk.

Some feel Bartch may have to move inside to guard at the next level after playing left tackle in college, but on the first day in Mobile he was used primarily on the outside. And Bartch more than held his own against some of the best pass rushers in the country. Bartch showcased his athleticism and nimble feet but is also surprisingly physical and plays with an edge. Considering his lack of experience there are understandably some technical issues that need to be cleaned up, but Bartch was often seen taking advantage of the Cincinnati Bengals coaching staffs wisdom.

The most important thing for small school prospects at the Senior Bowl is proving they belong and can hang with the big boys. Bartch aced that test with flying colors. 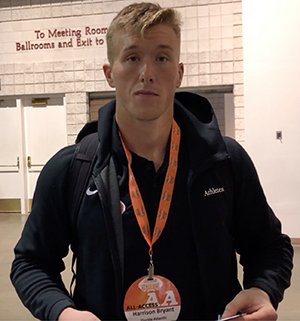 The pecking order at tight end in this class is still fluid and there is little in the way of a consensus in the Top 5-6 at the position. Harrison Bryant of Florida Atlantic is making a compelling case for why he should be near the top of the list.

A productive pass catching threat, Bryant is the reigning winner of the Mackey Award as the nation’s top tight end after racking up numbers rarely seen from the position in college. To the tune of 65 receptions for 1,004 yards, averaging 15.4 yards per catch, and 7 touchdowns.

Bryant flashed early and often in the first practice session, showcasing his reliable hands, route running and ability to get open. Particularly down the field against hapless linebackers. A scheme-diverse and versatile weapon who can line up all over the field, Bryant is a perfect fit for today’s pass-happy NFL.

Bryant is highly-regarded in both the scouting and analytics communities and appears well on his way toward securing a spot on Day 2. Perhaps as early as round two as the second tight end off the board. 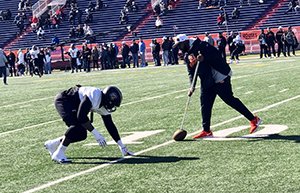 Coming into the week Oregon QB Justin Herbert and South Carolina DT Javon Kinlaw were widely regarded as the best two prospects in this year’s game.  So far both have justified those lofty rankings and top half of the first round projections.

Kinlaw was one of the winners from the weigh-in, coming in at 6-5 1/8 and 315 pounds with big 10 1/8 inch hands and long 34 5/8 inch arms.  Then the jumbo athlete translated those immense physical gifts over to the practice field, dominating at times and showcasing explosive playmaking ability.  Kinlaw is also making a positive impression off the field, with a charismatic, fun-loving personality and inspiring backstory.

Javon Kinlaw shares his story of growing up homeless earlier at the Senior Bowl.

“Living in basements, without electricity, no water… it made me a man at a young age.”

Herbert was just on a different level from the other passers on the South squad, spinning a beautiful ball and routinely making legitimate, big-time NFL-caliber throw despite it being a windy day.  Herbert looks every bit the part of a Top 10 overall pick and could be the fourth signal caller from this game in the past three years to come off the board in the Top 10 overall picks, following in the footsteps of Baker Mayfield, Josh Allen and Daniel Jones.  The key will be keeping it up throughout the rest of the week to help alleviate the concerns scouts have regarding consistency. 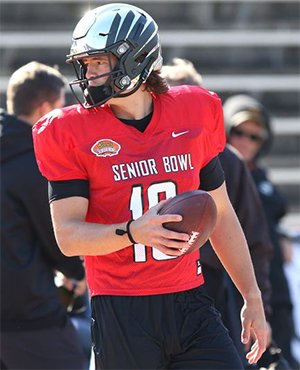