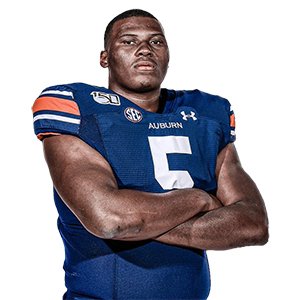 Scott Wright:  What is the self-scouting report in terms of strengths and weaknesses on Derrick Brown and what you bring to the table on gameday?

Derrick Brown:  I feel like my strengths would be my ability to play all three downs.  My ability to bring that full passion to the game every single snap and not take a play off.  I try to be a dominant force in all phases of the game on every single play.

Scott Wright:  You likely would’ve been a Top 20 overall pick in the 2019 NFL Draft but opted to return for your senior season.  You’re an even better prospect now.  What were the main factors in that decision and what aspect of your game has improved the most in the last year?

Derrick Brown:  I would say my ability to rush the passer has improved the most.  My decision to go back to school was based on wanting to graduate and spend time with my son in the first year of his life, which was really important to me.  Now I’m ready to take the next step.

Scott Wright:  You’ve had an opportunity to play against two of the countries top quarterback prospects in Tua Tagovailoa of Alabama and Joe Burrow of L.S.U.  They’re obviously both great players, but in your opinion who presents the greatest challenge for defenses?

Derrick Brown:  I can’t really even break them up because they both have different things they’re very good at.  Tua brings that aspect of being able to get the ball out quick and so does Joe.  At the end of the day I think Tua is the better runner, but the thing about Joe is if you let him sit in the pocket all day he’ll kill you.  I think you have to worry about Joe as a runner too because you see time in and time out when the pocket starts collapsing he starts to run the ball and you see he actually does have a lot of speed behind him.

Scott Wright:  Everyone who knows you raves about your intangibles such as character, intelligence, leadership, etc.  What path in life would you be pursing if you weren’t a football player?  Have you thought about any post-football plans yet?  After a long career in the NFL, of course.

Derrick Brown:  I would try to go into lobbying.  I’m looking into doing that or working for the secret service or a branch of the governments security agencies.

Scott Wright:  Evaluators love your versatility, with the ability to play either defensive tackle spot in a 4-3 as well as nose tackle or the five-technique in a 3-4.  Obviously you’re willing to play wherever a team asks, but where do you believe you offer the most value?  Do you have a favorite?

Derrick Brown:  I have no favorite.  At Auburn we play the 3-4 and we base out of a 4-3.  Being able to put on film that I can play all those positions was very beneficial to me in college because now I’m comfortable playing anywhere.  I’ve been very blessed to play in a system where we’ve done everything, whether it’s playing defensive end all the way down to playing the nose.  It doesn’t really matter to me because I’m going to try to do it at the highest level possible.