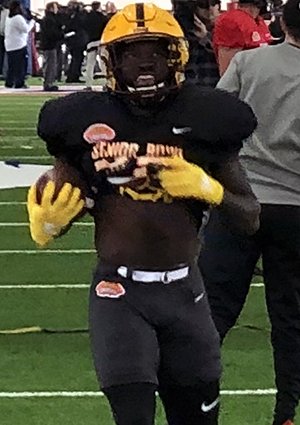 It’s always difficult for running backs to impress during the week of practices.  In all honesty the most valuable evaluation opportunity comes with the pass blocking drills.  The game is where runners really get a chance to shine.  With all that said, Eno Benjamin for Arizona St. has stood out the most with a honorable mention going to UCLA’s Joshua Kelley

A true junior, Benjamin was eligible to be invited to Mobile because he graduated in just three years.  Even though Benjamin had a somewhat disappointing final college campaign, going from 1,642 yards and 10 touchdowns the year before to 1,083 and 10, but the talent is clearly still there and it’s been on display this week.

Benjamin isn’t real big, checking in at 5-9 and 195 pounds, but is explosive with excellent speed and quickness and seems to have another gear compared to the other runners in town.  A well-rounded threat, Benjamin also excels as a pass catcher and despite that modest size has shown some feistiness as a blocker.

As usual this is a deep class of running backs and Benjamin projects as more of a mid round pick.  Benjamin has done a good job of rehabilitating his stock a bit though and there is now an outside chance he could come off the board in the latter part of Day 2. 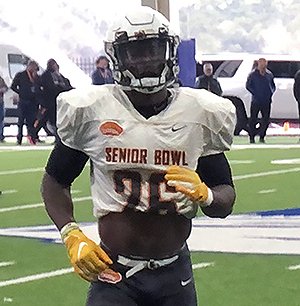 The draftnik and scouting communities are infatuated with the versatility of Clemson’s Isaiah Simmons, who will likely be a Top 10 overall pick.  Appalachian St. LB Akeem Davis-Gaither could be a nice backup plan for teams that miss out on Simmons.

Davis-Gaither is undersized at 6-0 1/2 and 219 pounds, leading some to question whether his best fit at the next level will be at outside linebacker or safety.  Based on this week, he’s capable of seeing action at either position.  Down in the box he is aggressive with the range to go sideline-to-sideline.  In coverage he’s shown the speed and athleticism to run stride for stride down the field with wideouts.  Modern offenses are all about creating matchup problems and that’s a lot more difficult to do with a guy like Davis-Gaither on the field.

Even though they possess similar skill sets Davis-Gaither doesn’t have the freakish length of Simmons, which is why he’ll be available late on Day 2 or maybe even the early part of Day 3.  I’d lean toward the higher end of that range though as Davis-Gaither is exactly the type of multifaceted defender the NFL is looking for. 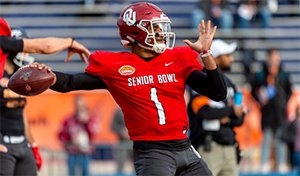 Oklahoma QB Jalen Hurts isn’t one of the highest rated prospects in Mobile but he’s definitely been one of the most popular.  A former standout for the Crimson Tide, Hurts is a bit of a folk hero in Mobile and has received all the attention that comes along with that status.

On the field the results have been mixed.

On the plus side Hurts can spin it, throwing a nice ball with terrific velocity.  Hurts hasn’t been able to show off his athleticism and running ability yet, but that should be prevalent on game day.  Unfortunately Hurts has struggled with his accuracy and consistency, which were both concerns on tape.  Perhaps his impressive intangibles will help Hurts overcome some of those deficiencies in the eyes of evaluators, but it’s clear he still has a ways to go.

A few months ago some were touting Hurts as a potential first round pick but that was overzealous then and looks even more so now.  Especially after this apples to apples comparison to Justin Herbert of Oregon and Jordan Love of Utah St.  I took an informal poll of colleagues regarding where Hurts will come off the board and the most optimistic projection was late-Day 2, perhaps with a compensatory pick.  Hurts will probably still be available on Day 3 though and profiles as an intriguing developmental project.

What to Expect from Justin Fields